Clear beats clever (but not always)

You’ve probably heard that clear always beats clever. And it usually does. But that’s the thing: usually.

If you only had a choice between one or the other, definitely go for clear. But you don’t have to choose. You can do both and get the best results.

When to be clear

A good rule of thumb:

When a person sees your brand or your message for the first time, go for “clear”.

The overarching principle here being “Don’t make me think”. At every point, when a person needs a second or two to understand what you’re saying, there’s a high chance of losing them.

You can try clever later. 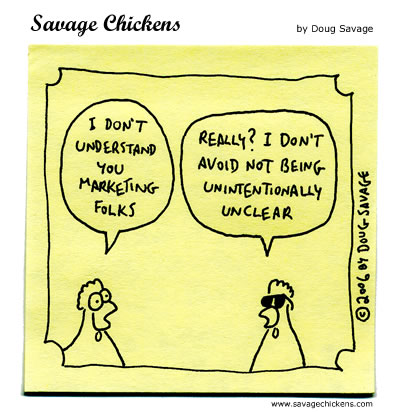 When to try clever

Once you’re confident that a visitor knows what you do and who you are, you can try testing clever.

First, you introduce the company and the product, as simply and as quickly as possible. Then, you add a clever twist to make it memorable.

Humor is a kind of “clever” too. Humor and laughter can boost likeability, and when people like you, they are much more likely to trust you and to buy from you.

Notice one thing common for all of them: it wouldn’t make sense if you didn’t already know what the company is and what it does.

“Just do it” could be anything. It could be a headline for a to-do app, it could be a life coach’s slogan, or… it could be a footwear and apparel company. It’s a sticky message which is introduced when you already know the company, the product and the philosophy behind it.

When to try the “clever” angle:

PS. Don’t try to be too clever, too early. If you use a message similar to “Just do it” in your ads (and you’re not Nike), don’t expect good results. Or any results, for that matter.